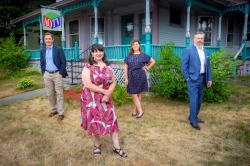 The program has helped small businesses like bankHometown customer Cleartech Group, a Leominster-based IT management and consulting company serving small and medium-sized businesses across central Massachusetts.

President and Owner Tony Fields said that when the shutdown began in March, he quickly put aside his company’s growth plan and made some tough choices, including laying off two employees, to ensure his company could continue supporting its clients. He said Cleartech’s focus turned to helping business owners “embrace the new normal” by putting in place the proper infrastructure and security needed for employees to work from home.

“Initially, it was a shock for us. Then it quickly became a humanitarian effort to get our customers connected so they could operate remotely as much as possible and as quickly as possible,” Fields said. “A lot of our value is in working with clients onsite, but we had to switch to a fully virtual environment ourselves and then get clients up and running remotely with reduced staff. In the span of two weeks, we went from growth mode to survival mode.”

Fields said that PPP funding helped relieve an “incredible sense of uncertainty” for himself and his nine employees and allowed him to feel positive not only about his own company’s ability to weather the storm but about the survival of the small businesses his company supports.

“When the PPP came out, it gave us all the hope that there was a light at the end of the tunnel,” he said. “It was like a bridge was built for us to get through this with confidence.”

The Small Business Administration’s Paycheck Protection Program (PPP) is a small business stimulus program included in the federal government’s $2.2 trillion Coronavirus Aid, Relief, and Economic Security (CARES) Act.  The PPP initially provided $349 billion for SBA lenders like bankHometown to fund loans to businesses on a first-come, first served basis in order to guarantee eight weeks of payroll and other costs to help businesses remain viable. Funds were exhausted in less than two weeks, but Congress provided for additional funding capacity of $320 billion. To qualify, businesses must have 500 or fewer employees and demonstrate that they have been negatively affected by the Coronavirus. If used for payroll and other qualifying expenses, the loans are forgivable.

The program also helped bankHometown customer Athol-Orange Community Television, a non-profit public access station centered in Athol. Executive Director Carol Courville said AOTV was luckier than most non-profits in being able to rely on funding from cable subscriptions but that she and her board quickly saw the potential for the pandemic’s long-term negative effect in the form of cancelled fundraising events and other sponsorships.

“We knew we weren’t going to be able to do the type of fundraising necessary to continue our mission, and that hurt us a lot,” Courville said. “We knew right away that this would be a long haul and that we could have budgetary issues that lasted well into the fall and through the rest of the year.”

Courville said that securing funds from the PPP was an enormous relief both mentally and emotionally on herself and her one full-time and three part-time employees, who could then work from home to create the station’s programming without worrying about potential layoffs.

“Taking that burden off the staff’s shoulders gave them security and that was golden,” she said. “They didn’t have to worry about raising funds or losing their jobs while completely changing the whole way we provided services and quickly adapted to new technology to produce government meetings and other programs.  It would have been overwhelming.”

bankHometown’s commercial lending teams worked tirelessly to submit applications on behalf of hundreds of its small business customers like Cleartech and AOTV, knowing that for many business owners, timing was critical.

“These are trying times, and we understand the financial situation our customers are facing and the negative impact it can have on their business, the staff, and the community,” said bankHometown President and CEO Robert J. Morton. “We moved quickly to get these funds in our customers’ hands so they could meet all of their obligations. As a community bank, this is what we do and I’m proud of our ability to help local organizations,” he said.

Despite national reports that some PPP funds went to larger businesses, approximately 60 percent of the PPP loans bankHometown processed were less than $50,000 and more than 90 percent were less than $250,000, indicating that on the local level, the program has benefitted the small businesses for which it was intended.

Courville credits bankHometown Vice President and Commercial Loan Officer Christina DiRusso as well as the bank’s Athol office Assistant Vice President and Branch Officer Marc Ostberg for helping AOTV secure their economic lifeline quickly in the first round of the PPP, when colleagues at other small businesses were having trouble getting a call back from bigger banks.

“Christina called me back the first day and made it easy for me. She took me through the whole application process, which was really designed for businesses and not for not-for-profits,” Courville recalls. “That’s why working with a local bank like bankHometown was so important. It made a big difference to know that you could talk to someone. They made it happen.”

“We couldn’t have kept afloat if the money ran out,” she added. “So I just want to thank bankHometown.”

Fields said he didn’t realize how unusual his strong business relationship with bankHometown’s DiRusso and Leominster office Assistant Vice President and Branch Officer Donna Daigle was, until he heard from colleagues in a global entrepreneur forum who voiced frustration in getting their banks to assist them with their PPP application or even return their calls.

“With the PPP, I was always informed and knew where I stood, so I just assumed that this was how it got done, this was the norm,” he said. “But my fellow entrepreneurs were struggling through the process and experienced at least two weeks of unnecessary anxiety that I never felt. That’s when I realized how special my partnership with bankHometown was.”

Fields said he was approved and had the funds in-hand quickly while more than half of the entrepreneurs he connects with were still struggling to apply, proving that a local banking relationship is key to sustaining small business.

“They have your back and are part of your business. They’re an advocate working for you,” he said. “Now more than ever, I’m a cheerleader for bankHometown.”