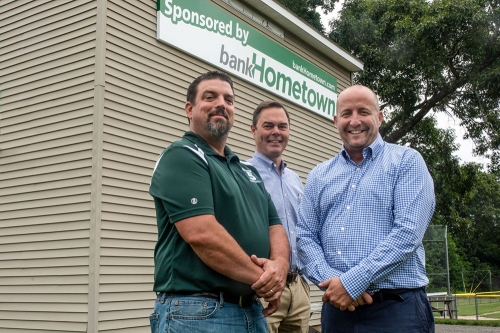 OXFORD, MASSACHUSETTS — bankHometown recently donated $5,000 to the Sutton Youth Baseball League (SYBL) to assist the organization in further developing its Hough Road facilities. With the recent merger of bankHometown and Millbury Savings Bank, this brings the combined banks’ total contributions to SYBL to $21,000.

SYBL President Chad Garand and Treasurer Corey Litchfield said that funding will be used for field improvements and equipment for the league’s Farm division, targeting players age 7 to 9 whose abilities are beyond Tee Ball but who do not yet possess the skills necessary to join the Minor division. Phased, multi-year improvements will include extensive infield and outfield grounds work as well as installing fencing, dugouts, bullpen areas, and other investments.

“We want to thank bankHometown for helping us make the facilities first-class for our young players as they work on building both their confidence and abilities,” Garand said. “That will ensure the kids remain engaged and continue to develop the skills necessary to perform well at higher levels.”

Previous contributions allowed SYBL to make significant improvements to its existing Hough Road upper and lower fields, including redoing the turf on the major/minor league field, adding a scorer’s and announcer’s box at each field, purchasing new batting cages, and repairing the irrigation system.

“Youth sports play such an important part in developing kids’ skills, abilities, and a competitive spirit that helps unlock their full potential,” said Robert J. Morton, bankHometown’s president and chief executive officer. “We’re pleased to continue supporting Sutton Youth Baseball and to making sure kids have a safe and fun environment to play in.”